No one would expect any good, peace and security from Pakistan and its system: Dr. Allah Nizar Baloch 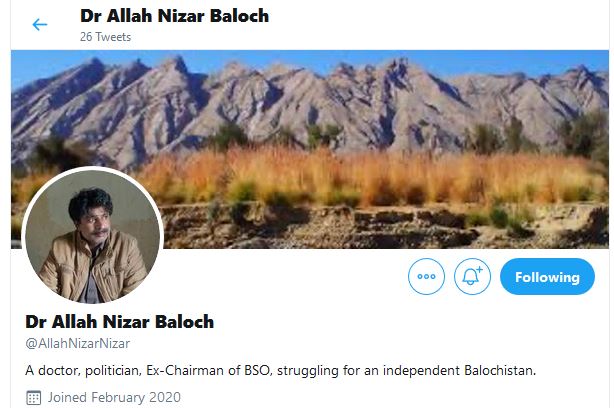 Baloch pro-independent leader Dr. Allah Nizar Baloch said that while the Baloch nation is protesting against the tragedy of Dannuk and the brutalities and cruelties of Pakistan army and its sponsored death squads, on the other hand, the death squads’ crimes are gaining momentum. Due to the absence of media coverage, almost all incidents remain unreported. The increased momentum in Pakistan army’s message to the Baloch nation that it would not halt the Baloch genocide no matter how people demonstrate peacefully.

He added that yesterday in Pedark local death squads, Sardar Aziz’s gangs, entered a house and harassed the residents of that house and looted the valuables including jewelry. Sardar Aziz and his son Shahmeer Alami are key members of the terrorist organization Lashkar-e-Khurasan which is the Balochistan wing of Daesh of ISIS. They have the full support of Pakistan’s establishment including the army and intelligence agencies. This group has killed numerous innocent people and looted many houses in Gorkop, Pedrak, and Pasni as well across the coastal areas of Balochistan. Sardar Aziz’s death squad is very active and playing with the honor, dignity, lives and wealth of common people. There are several camps of this militia in the region of Pedrak where they are training religious extremists and terrorist groups. They are recruiting from across the different regions of Balochistan.

Dr. Allah Nizar said that the death squads were active throughout Balochistan, including the area of Mashkay, Raghai and other adjacent areas. Death Squads had been playing havoc in these areas. On 21st May they raped a student Azhar Ali son of Asghar Ali in a military camp in Mashkay Alangi. An FIR was lodged against the culprits when the people of the areas protested. But after a few days, the army intervened directly to protect the criminals and exerted pressure on the victim’s family and forced them to withdraw their FIR.

He said that the crimes of death squad had mounted to unprecedented levels where innocent children, women and the honor of the people are not safe. If in some cases where the police try to take action, the agencies and army intervene to protect their goons and silence the people through the barrel of gun. Hence asking help from the law enforcement agencies and police would be tantamount to suicide as it would bring the wrath of the army on those who seek help.

Dr. Allah Nizar Baloch said, “I want to make this clear, no one would expect any good, peace and security from Pakistan and its system, because goodness, peace and security are not part of colonialist’s psychology. If in case Pakistan was a country of a civilized and cultured nation then probably our dignity and honor would be safe, but Pakistan is like a wanton animal that lacks in such values. Therefore, the Baloch nation should utilize their energies for national liberation because freedom from Pakistan is the only way to get a respectful and dignified life.”