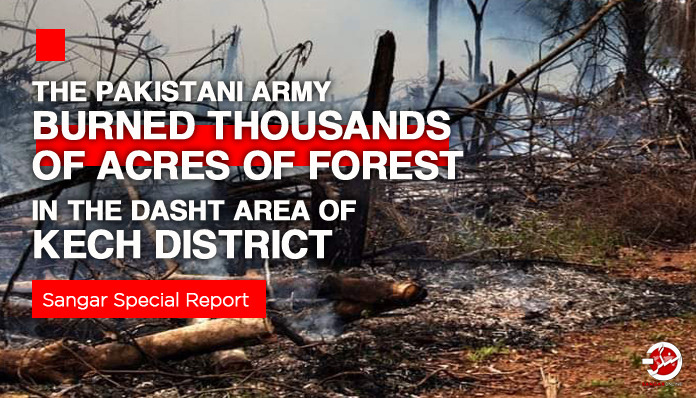 In the Dasht area of ​​Kech District, between the nights of September 19 and 20, the state army, along with its local armed supporters, set fire to the Dasth, Upsi Gazz forest, which enveloped the entire Dasht and reached Jan Muhammad Bazaar.

The battles of Goharg Dap, Dumb, Langasi, Jan Mohammad Bazaar and Zarrin Bug were completely burnt to ashes by this fire. In which hundreds of kinds of herbs and rare trees were burnt to ashes.

The state army has recently set up checkpoints and a large check post in these areas.

The burning of the desert’s forests by the army is one of the reasons to reduce the fear of the insurgents.

It is to be noted that the backward areas of Dasht and Ketch district were settled after rains this year after many years of drought. Fed up with the long drought, the locals migrated to the cities but now people have started settling here again and life is returning here but another famine is being faced after the burning of forests by the state army.

In the video you can see the swaying and lush forests.

And in this video, the swaying and lush forests can be seen being destroyed.

According to eyewitnesses, the Pakistani army along with its local facilitators and death squad set fire to the forest in Dasht-e-Kor between Langasi and Upsi yards. The fire spread due to strong winds. The fire engulfed an area of ​​up to 50 km around Hasadi Domb Dap, Bandgah, Zarrin Bagh and Jan Mohammad Bazaar.

Filled with yards and other trees in the desert, these forests are home to hundreds of species of wildlife, in addition to pastures for local cattle.

This forest, which is mostly full of yards of trees, is home to butterflies, bulbuls, hawks and many other birds. These areas of Balochistan have been in the grip of drought for the last twenty years due to low rainfall. Due to which the forests and wildlife have also been damaged. Due to the rains in the last two years, the water level in the land has improved and the condition of the forests has improved. There has also been an increase in wildlife growth.

These areas are called rainfed areas for cultivation. Farming here is largely dependent on rainfall. The rains are stopped by tying dams around the fields and after this water dries up, the crop is grown in the fields. In the past, people used to cut the whole year from one rainy crop till the next rain.

A local farmer said the rains had revived life in the desert. The ground was green. We have also planted the crop in our fields and now the crop was ripe and ready when the Pakistani army burnt it. We are in a worse situation now. If in the past we did not have grass to feed the cattle but there were forests from which we used to provide firewood and fodder for the cattle, now everything is burnt down. Our life, these were the trees that made us live in this desert for hundreds of years.

He said that it takes ten or twenty years, not one or two years, for a normal tree to grow tall and strong, whereas it is a natural forest where these trees survived for years in spite of erratic rains and harsh weather. It was at least thirty years old. From this you can estimate the severity of the damage.

The burning of orchards and fields in Balochistan has always been part of the offensive and retaliatory actions of the forces. But in recent days, in many areas of Makran, the forces have burnt a large number of forests during their offensive operations, which has led to deforestation and wildlife. Severe damage.

Before burning the forests in the Dasht area, the forces had also set fire to a large number of Daz forests in the nearby mountain range “Mazanband Dasht”.

Mountain goats, deer and other rare wild animals are found in these areas. The last few years have seen an improvement in the growth of wildlife and the recent rains have also made the forests greener. In such cases, these actions of the forces pose a serious threat to natural forests and wildlife.

“Pakistani army continues its scorch the earth policy in Balochistan. Today date palms were burnt in Gomazai Kech. A forest was burnt in Darmani Baint district Awaran. Many houses were set ablaze in Peerandar Awaran.”

It is to be noted that since last month, in the ongoing operation of the forces in Gachak, Wadi Meshke, Awaran, Zhao, dozens of forests and crops have been burnt and hundreds of houses have been set on fire.

“Huge  military operations going on in many parts of Balochistan. For scorch the earth policy so many date trees burnt in Mand & forests of many KM burnt in Langasi Kech, Solair & Toba areas of Gichk. A house burnt in Tank which was bombarded in 2012 killing a child Bakhti & others.”

“Pakistani army continues its scorch the earth policy in Balochistan. Today date palms were burnt in Gomazai Kech. A forest was burnt in Darmani Baint district Awaran. Many houses were set ablaze in Peerandar Awaran.”

“In a new offensive #PakistanArmy has burnt huge orchards of date tree in Mand,a forest encompassing more than 50 km in Dasht & dwellings of civilians in Gichk area of Makuran region. #PakistanArmy must be made accountable for scorched earth policy & WarCrimes in #Balochistan.”