The failure of CPEC which is a bright lesson of Baloch liberation struggle. 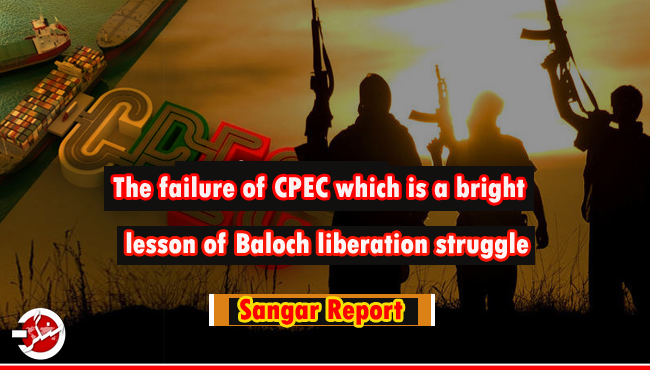 Balochisan’s costal route is under the attention of whole world and China invested a huge project CPEC but the result has victimized of completely unsuccessful. The occupied Balochistan especially costal route Gawadar has a significant status due to its geographical importance. The international investors and military powers are known important to present in this. Once upon time, had shown its interest later Russia and others too, since last decade China has been willing to occupying on the Baloch ocean and Baloch resources, did a huge investment on China Pakistan Economic Corridor simultaneously of this investment China had been given massively economic and military supports to Pakistan and the debits came through CPEC. according to analysts China gave a massive debits to Pakistan on the hope success and functional of CPEC but the ground circumstance has changed when Baloch freedom fighters have brought escalation to targeting into the connected military constructional company (FWO) and others Pakistani forces and the Chinese investors, its local puppets and others machinery things became under the attacks of Baloch fighters on daily bases then the activities of CPEC projects seem to weak down and today world knows the establishment of CPEC projects as a dead body.

It is clear that Pakistani military government many times had believed to China the security supervision has been cleared and CPEC security is prove project where brought a convoy and later did a drama name of “Peace March” but the Pakistani claims became failed when Baloch fighters despite in safe siege of huge numbers Army Include three helicopters, attacked on the Chinese tailors.

This year a large numbers Chinese investors came in Gawadar. The local sources said” More hundred people were living in the will known five stars PC hotel where Baloch freedom fighters carried out very strength attack, had been continued for two days which shocked the world and declared the all Pakistani claims baseless about CPEC and have proved that Baloch nation don’t handover the Baloch land any else.

According verified sources in this Majeed Bridge Fedyen attack into famous five stars PC hotel not only several Pakistani military personnel even many Chinese, Arab and Pakistani investors were killed too. Before this attack CPEC was taking its last breath and this attack fulfilled a last pin of role to termination of CPEC project.

The Baloch pro-independent armed organization’s are always saying that The investments on Baloch motherland will not be accepted without consent of Baloch nation or with simple words while Baloch will be own of its own motherland and independent state.

Baloch pro-independence leader Dr Allah Nizar Baloch expresses the failure of CPEC at his new Twitte” CPEC is now a dead project. Baloch sons gave great sacrifices for their survival and to make China realize that a strong nation named Baloch lives in Balochistan. Nothing can happen on their homeland without their consent.”

It should be cleared the regarding CPEC reports and analyses indicate that this project have dismissed. According a local journalist “This time any CPEC named project isn’t seemed in Gawadar. Apparently, beside Army and intelligence agencies, CPEC is victim of silence completely. while to constructing the Khuzdar and Jahal Magsi route has already been declined by China.

According some analysts China had given a large number of debit to Pakistan in respect of CPEC but continuously attacks of pro-independences, have made this project unsuccessful and Pakistan has already become economic hardship now the condition has been more aggravated.

If we look the last few years ago the speed of CPEC so today there is a great stagnation where they don’t have budget to constructing of approved projects Gwadar Airport and three hundreds MW electricity because which budgets were on these projects or are there, have been spent on security. Therefore according analysts, upcoming days this project will be stagnation or will be dismissed completely.

According to experts CPEC project is a fail project but Pakistan once again through some so called Baloch and its puppets Dr Malik and others include, are attempted to give nourish this project so the Pakistani Army and its so called politicians both survival.

This project had been established well knowingly in the Government of Muslim League N. In some period this project had become that much significant so very political organisations were attempting to get its credit on themselves. Some analysts were started to giving credit to the former military dictator Parviz Mushraf and after his military leadership. Later a time came, different wake of lives persons had started to saying it a progressive project and the criticizers were looked doubtful as on their patriotism. Later after establishment of PTI government indirectly attacks were started on this project. Firstly, Minster of Trade Razag Dawood criticized on it and later federal law minister of communications Murad Saeed claimed corruption on former federal home minister Ahsan Iqbal.
Now this impression is common that at least working on CPEC has stopped. The provincial government’s former spokesperson and the main person of Pakistani Jan Mohammad Buladi expressed that the considerations of current government is on the CPEC. He said that “ Land has been taken for Gwadar airport but no work is visible on it. China also had to set up 300 MW power plant in Gwadar. Land has been purchased for this too but no work is visible. There is stagnation at Gwadar port. So in the last one year, there has been hardly seen any work on CPEC in Balochistan. I think this project is almost over here.”

Many constituents think that Chinese leaders are angry over allegations of corruption in CPEC projects. An important new linked to CPEC is related to a ministry official who said it on the condition of anonymity. He said” “When Razzaq Dawood and Murad Saeed made the allegations, the Chinese became very upset. First they used to give loans and later they were called Procurement. Now they say you should do the procurement first and do not guarantee whether they will lend or not. So how can the government do procurement? It has no funds. Under these circumstances, it seems that the CPEC is now becoming part of history. I don’t think it will work anymore. Even if windy, its speed would be very slow.
According to the diplomats the accusations of malfeasance and the attack of Baloch freedom fighter made Chinese worried. Export, Pakistani diplomats and Baloch freedom fighters according CPEC to see the ripsaw then it is cleared to see that CEPC project has totally failed. There is no hope of this project to be succeeded. Whether it be the corruptions of Pakistan’s powerful forces or other global powers that view the project in more military terms than the economic one. These organizations targeted their armed operations, which continue to this day. Due to this, the work on the project was slowed down in the first place and afterwards a large part of the money spent on the project was started in terms of security. This continuation of the attacks of the Baloch freedom fighters has become a worry for China and it is perception that even if the project continues, there is no hope of success in the future. Because the attacks of the Baloch have created the impression that the project which Pakistan considers its abolishment, will face the same resistance in the future. In such a situation, China and other investors in the world have also come to realize that the extent to which the security assistance is provided to this project cannot be successful. That’s why we see today that the China Pakistan Economic Corridor is a dead project. In which the interest of many Pakistanis along with China has ended.
The failure of the CPEC project has sent a message not only to Baloch society also to the world that which organizations are working for the independence of Balochistan are fully capable of defending their homeland and their nation, which can go against the any explanation projects and the idea of perpetuating slavery to the last breath.