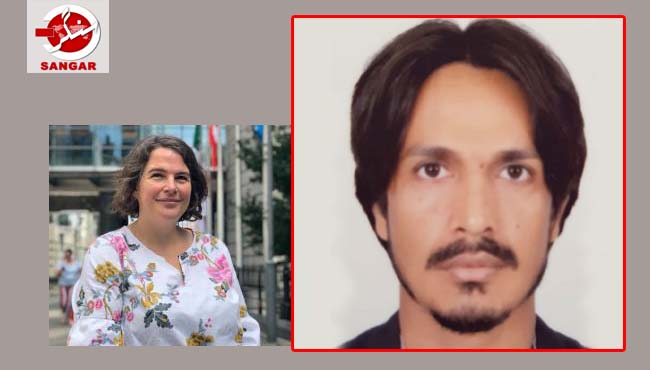 Jude Kirton-Darling, Member of European Parliament, has sought answers from UAE’s ambassador Mohammad Issa Hamad about the arrest of Baloch rights activist Rashid Hussain by UAE authorities and his subsequent extradition.
In a letter the Labour Party MEP from North East England has expressed “great concerns” about the whole issue.
Jude Kirton-Darling has noted in the letter, a copy of which has been made available to The Balochistan Post, that Rashid Hussain was detained for months without any charges.
She has further stated in the letter that number of leading human rights organisations such as Amnesty International and Human Rights Watch have publicly conveyed concerns that Rashid Hussain’s life would be put at risk if deported to Pakistan.
“It would appear that Mr Hussain has indeed been deported to Pakistan through Interpol, as has been reported by a Pakistani TV news report over the summer,” the letter reads.
The MEP confirms in the letter: “I have seen a document which is a certificate for exit issued by the Federal Authority for Identity and Citizenship. This document shows that Rashid Hussain left the UAE on 22 June for Nushki, Pakistan, a city which does not have a civilian airport. It has also been reported to me that Rashid Hussain left the UAE without his travel documents.”
The MEP urges the UAE ambassador to Belgium “to confirm whether this information is correct, and to shed light on the process that led to Rashid Hussain’s extradition to Pakistan.”
The copies of letter have also been sent to Federica Mogherini, High Representative of the EU Foreign Affairs and Security Policy, and Jean-François Cautain, Head of the Delegation of the EU to Pakistan.
Rashid Hussain Brohi, a 23-year-old Baloch activist who had travelled to UAE to “escape persecution from Pakistan” was arrested by UAE authorities in December last year. No charges were filed against Mr Brohi and according to documents obtained from UAE authorities he was deported to Pakistan on 22nd June. He has not been produced before Pakistani courts ever since his deportation. Rashid Hussain’s family has alleged that his life is at great risk in Pakistan.