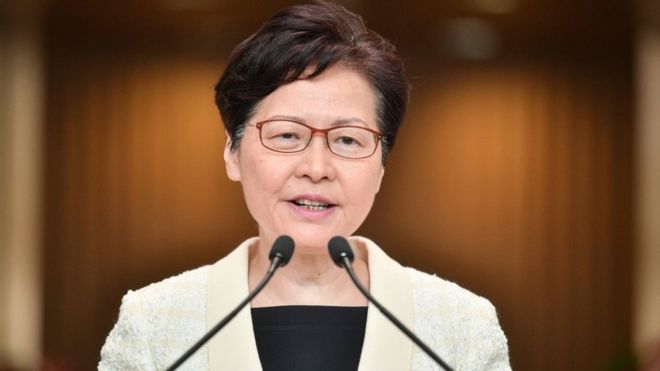 Hong Kong leader Carrie Lam has said she never offered to resign, responding to a leaked audio recording suggesting she wanted to.
At a press conference she said she had “never tendered any resignation” to the Chinese government.
Yesterday a recording of a private meeting where she is heard saying she would resign if she could was leaked.
Hong Kong has seen months of anti-government protests with many calling for Ms Lam to step down.
The chief executive did not dispute the authenticity of the audio which was published by news agency Reuters on Monday.
On the recording, she is heard blaming herself for igniting the territory’s political crisis, saying it was unforgiveable of her to have caused such huge havoc
“If I have a choice, the first thing is to quit, having made a deep apology, is to step down,” the voice on the tape says.
At Tuesday’s press conference, Ms Lam said it was “totally unacceptable” that her remarks made in private had been recorded and passed to the media.

I have never tendered a resignation to the Central People’s Government,” the chief executive told reporters. “I have not even contemplated to discuss a resignation with the Central People’s Government.
“The choice of not resigning is my own choice,” she said, insisting she wanted “to help Hong Kong in a very difficult situation and to serve the people of Hong Kong”.
Ms Lam said her government was “very anxious” about the violence in the city and that she felt “most Hong Kong people don’t want to see it”.
“So our common goal is to stop this violence, so that society can soon return to peace,” she said, promising to work towards more dialogue with protesters.
Hong Kong is in its 14th successive week of demonstrations.
The protests were sparked by changes to a law that would allow extradition to mainland China, but have since widened to include calls for an independent inquiry into police brutality and greater democracy.
Protests over the weekend saw some of the worst violence in weeks between protesters and police.
Protesters threw petrol bombs, lit fires and attacked the city’s parliament building while police used tear gas, rubber bullets, and water cannons and fired live warning shots.
On Monday, thousands of secondary school and university students boycotted classes and gathered in the city Centre.