US hits China with new wave of tariffs 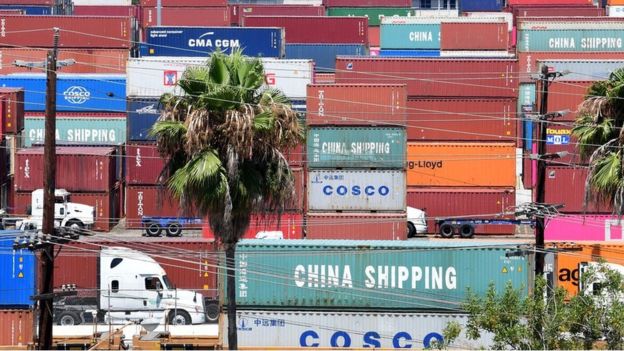 The US has imposed fresh tariffs on $112bn (£92bn) of Chinese imported goods such as shoes, nappies and food.The new tariffs are a sharp escalation in the bruising trade war, and could cost households $800 a year.

The move is the first phase of US President Donald Trump’s latest plan to place 15% duties on $300bn of Chinese imports by the end of the year.
In response, Beijing introduced tariffs on US crude oil, the first time fuel has been targeted.
If fully imposed, Mr Trump’s programmer would mean that nearly all Chinese imports – worth about $550bn – would be subject to punitive tariffs.

What was initially a dispute over China’s allegedly unfair trade practices is increasingly seen as a geopolitical power struggle.
So far, Washington has imposed tariffs on some $250bn of Chinese goods to pressure Beijing into changing its policies on intellectual property, industrial subsidies, market access, and the forced transfers of technology to Chinese firms.
Beijing has consistently denied that it engages in unfair trade practices, and has retaliated with tariffs on $110bn of US products.