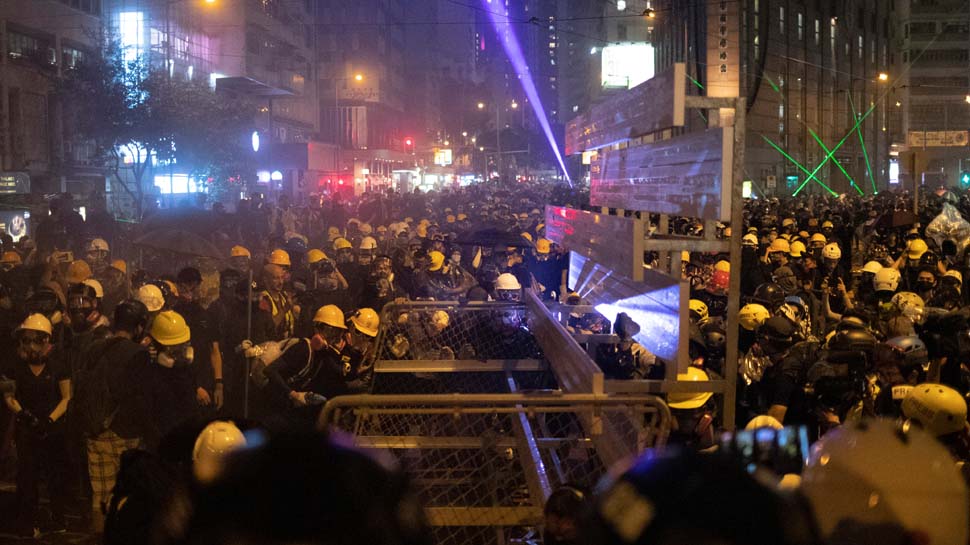 Hong Kong police fired tear gas and water cannon on Saturday and pro-democracy protesters threw petrol bombs in the latest in a series of chaotic clashes that have plunged the Chinese-ruled city into its worst political crisis in decades.
Police fired round after round of tear gas and protesters took cover behind umbrellas between the local headquarters of China`s People`s Liberation Army and the government. Protesters also threw bricks dug up from pathways at police.
Many shops and restaurants in protest areas popular with tourists were shuttered, while curious visitors peered out from windows of some luxury hotels overlooking the demonstrations.
Protest numbers had dwindled by the early hours of Sunday, with just a few hundred demonstrators and some riot police visible.
The water cannon unleashed blue-dyed water, to make it easier for police to identify protesters.
Riot police then marched on foot towards the neighboring Admiralty district, followed by 20 police cars, where protesters had thrown fire bombs from flyovers, some landing close to police. Others shone blue and green lasers at police lines.
There were unconfirmed reports of an off-duty policeman being wounded.
In the neighboring Wanchai bar and restaurant district, police fought running battles with protesters, some beating them with truncheons, according to Reuters witnesses.
There were several arrests. “We have to keep protesting, we cannot let China take back Hong Kong now,” said Evelyn, a 25-year-old asset manager, chanting “gangster” at police outside a subway station across the harbor from the central business area in Kowloon district.
Asked what she would do if authorities did not respond to protesters` demands, she said: “Maybe I will leave Hong Kong. I absolutely cannot live under Chinese rule.”
The protests, which at one point blocked three key roads, came on the fifth anniversary of a decision by China to curtail democratic reforms and rule out universal suffrage in Hong Kong, a former British colony that was returned to China in 1997.
“The behaviors of the radical protesters gravely breach the public peace and pose a serious threat to the safety of police officers on duty and members of the public at the scene,” the government said in a statement.
The People`s Liberation Army on Thursday rotated its troops in Hong Kong in what it said was a routine operation. Their Hong Kong HQ was the former base of the British military garrison.
Senior Chinese officials have warned that if the turmoil persists, “the central government must intervene”.
Police were targeting MTR subway trains to make arrests, with TV footage showing people being beaten as they cowered on the floor behind umbrellas. Some rail lines were closed.

HAND SIGNALS
Thousands took to the streets of the Asian financial hub for a largely peaceful, meandering rally in the afternoon rain. Many of them joined a “Christian march” from Wanchai and congregated next to the Legislative Council, which was stormed by activists in an earlier protest.
Other protesters, many wearing black and face masks, marched in the bustling tourist area of Causeway Bay. The crowds grew after dusk in Wanchai, where demonstrators built roadblocks and banged iron sticks. Firemen battled a huge blaze outside a Methodist church in the main Hennessy Road where water cannon moved in.
It was the same pattern all evening. Police advanced steadily, protesters retreated. Pedestrians yelled out “black cops”, “gangsters” and “get fucked” as police passed.
There were also standoffs in North Point and Fortress Hill, to the east of Causeway Bay, and police fired tear gas at fire-bomb throwing protesters over the harbour in Tsim Sha Tsui.
“I was at home but when I saw them beating and arresting anyone they saw on the train I rushed down,” said Joanna Wong, one of several hundred people shouting abuse at riot police blocking one subway station. “I will keep protesting even if I go to jail,” she said, her voice shaking with emotion.
Some people in cars passing through one protest area honked their horns in support of protesters
The protests have gone on for three months, sometimes turning violent, and have targeted the airport, the legislature and the Liaison Office, the symbol of Chinese rule.
Police arrested a number of prominent pro-democracy activists and three lawmakers on Friday, seeking to rein in a movement that began with anger over planned legislation allowing extraditions to mainland China, where courts are controlled by the ruling Communist Party.
It soon broadened into calls for democracy amid fears China is squeezing Hong Kong`s freedoms.
But the latest protests have no leaders. The slogan is “be like water”, meaning be flexible. Marchers on Saturday were marching here and there, wherever streets took them, communicating with different hand signals and chanting “stand with Hong Kong” and “fight for freedom”.

China denies the charge of meddling in Hong Kong, which it says is an internal affair. It has denounced the protests and warned of the damage to the economy.
China is eager to quell the unrest before the 70th anniversary of the founding of the People`s Republic of China on Oct. 1 but protesters vandalized a long red banner celebrating the event to cheers from the crowd.
Beijing has also accused foreign powers, particularly the United States and Britain, of fomenting the demonstrations.
Hong Kong returned to China under a “one country, two systems” formula that allows it to keep freedoms not enjoyed on the mainland, like the freedom to protest and an independent legal system.
“After 20 years of `one country, two systems`, we are finding out that it is a lie. We don’t accept the Chinese dictatorship,” said Noel, 24, an artist and recent philosophy graduate as fellow protesters screamed “Triads” at riot police.
“We protesters are fighting for values. I have to say I am not overly optimistic. But fighting dictatorship is the right thing to do.
“If China sends troops to shoot us, then Hong Kong is fucked. Hong Kong will end.”
There have been frequent clashes between protesters and police, who have fired tear gas and rubber bullets amid accusations of excessive force. “A lot of people from the outside think it is the police who escalate (the violence) first,” a police officer told a media briefing. “This is not true.”
An off-duty policeman was attacked on Friday night by three unidentified men with a knife, suffering wounds to his limbs and back, police said. The news was a top-trending topic on China`s Weibo.
With Hong Kong facing its first recession in a decade, speculation has grown that the city government may impose emergency laws, giving it extra powers over detentions, censorship and curfews.
Lawmaker Fernando Cheung said the arrests of the three legislators were probably aimed at causing more chaos to justify the use of emergency laws.