Quetta : Sub editor of a local newspaper injured by gunshot 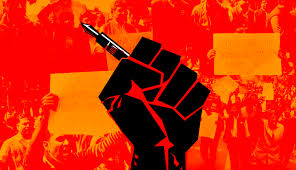 Sangar News
Unknown assailants shot the sub editor of a local newspaper in Quetta city of Balochistan, on Friday.
Detail received by Sangar Media, Senior sub editor of the Daily newspaper, Jameel Ahmed received critical injuries when unidentified armed men opened fire at him. Jameel Ahmed had been attacked while he was going home after finishing his work from Quetta press club.
Jameel is also the secretary general of Shown Adbi Deewan, a literary organization and a poet of Brahvi language.
Balochistan Union of Journalists and Quetta Press Club have condemned the attack and demanded the immediate arrest of the culprits.
According to the hospital sources, the victim had received 4 bullets and he is admitted to the trauma center.
The reason of the attack has not been ascertained yet.
Many journalists, bloggers and social activists have been abducted or attacked in Balochistan in last two decades. Some known journalists and anchor persons from Karachi and Punjab have also been targeted for spreading awareness about Balochistan issue.