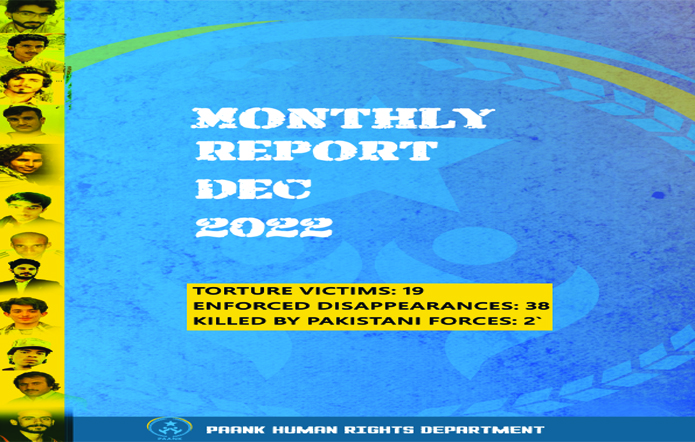 In December, 38 people forcibly disappeared in Balochistan, One of the dump body was recovered, and one was killed by police violence during a peaceful demonstration in Hormara.

The human rights situation in Balochistan, is reportedly extremely dire, with the Pakistani security

forces being accused of consistently violating human rights, including through the use of enforced

disappearances, torture, and raids on homes. In December, 38 people were allegedly abducted and

the mutilated body of Imran Babo was found in Awaran. Despite the release of 19 previously

abducted individuals, the month reportedly ended with continued impunity and injustice. The

freedoms of speech and movement are also being restricted in Balochistan, and political activists

are being arrested. The situation in Gwadar is particularly concerning, with the use of force against

civilians and the shutdown of the internet. The residents of every city, town, and village in

Balochistan are said to have experienced oppression, injustice, and inequality at the hands of the

Nations articles, including article 2 of the International Covenant on Civil and Political Rights,

Covenant, without distinction of any kind, such as race, colour, sex, language, religion, political

or other opinion, national or social origin, property, birth or other status.” The enforced

disappearances and torture of civilians, including women and children, also violate article 7 of the

Covenant, which states that “No one shall be subjected to torture or to cruel, inhuman or degrading

treatment or punishment.” Killing of civilians violates the right to life, liberty and security of

person (Article 3), the prohibition of torture and cruel, inhuman or degrading treatment or

punishment (Article 5), the right to freedom of expression and opinion (Article 19) and the right

to freedom of movement (Article 13). It also violates international law, including the International

Covenant on Civil and Political Rights, to which Pakistan is a party.

remained silent on the human rights situation in Balochistan. This silence is alleged to only serve

to further enable and legitimize the ongoing abuses committed by the Pakistani security forces. It

is imperative that the international community, including the UN and human rights organizations,

Balochistan. The people of Balochistan deserve justice and protection of their fundamental human