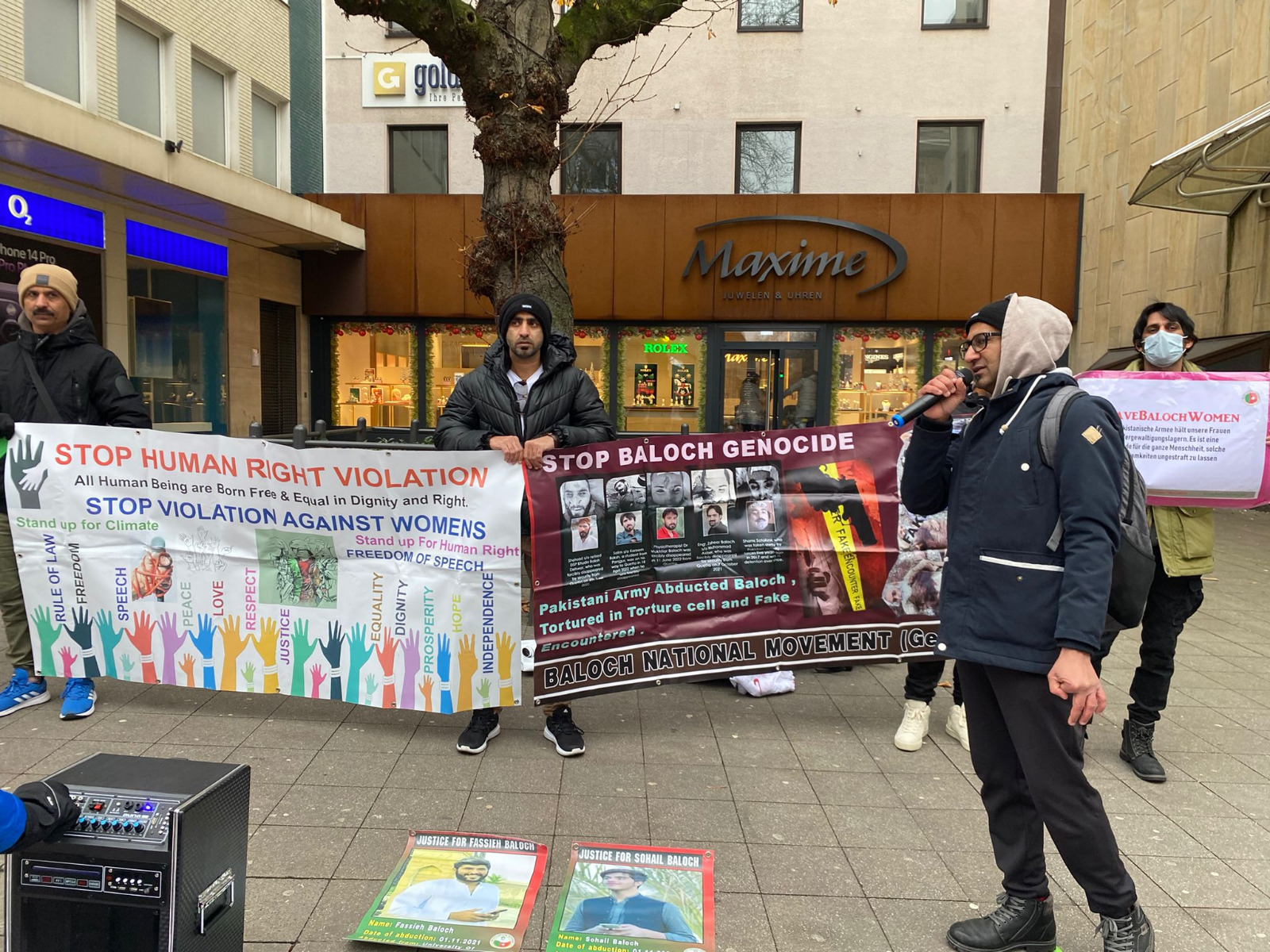 On International Human Rights Day, Baloch National Movement held protests in Netherlands and Germany. The protesters expressed their concern against Pakistani atrocities and Baloch genocide in Balochistan and appealed for help from the international community.

The Baloch National Movement Netherlands Chapter held a protest against the Baloch genocide and atrocities by Pakistan in Balochistan on the occasion of December 10 International Human Rights Day in Dam Square Amsterdam.They raised slogans in favour of their demands and against Pakistan and distributed pamphlets for the awareness of local people.

Addressing the protest demonstration, the media coordinator of PaanK (BNM HR Department) Jamal Baloch said that the Pakistan Army had burnt educational institutions and the Baloch were deprived of their fundamental human rights. There are torture cells in all Pakistan Army camps where people are kept for years after the Abducting.

He said Baloch has been demanding the right to life for the past seven decades. Today, Human Rights Day is being celebrated worldwide, but the families of the forcibly disappeared persons are protesting in Balochistan. We want the international community to take notice of human rights violations in Balochistan.

Nabeel Baloch, a member of BNM Netherlands, said that we are gathered here for our rights. Our struggle is also for our rights. For the same rights for which Human Rights Day is being celebrated worldwide, we have been grinding in the mill of oppression for seventy years. There are many human rights laws worldwide, but these laws are missing in Balochistan. The Pakistani army does not consider us as human beings.

Baloch National Movement Germany Chapter organized a demonstration on the international Human Rights Day in Essen.
They provided awareness to the people about ongoing gross human rights violations in Balochistan by the state of Pakistan.

In the last two decades, Pakistan Army and other law enforcement agencies forcibly disappeared thousands of political and social activists across Balochistan. They have been in the torture cells of Pakistan and endure inhuman tortures day in day out.

In the same way, Pakistan Army killed thousands of innocent Baloch in every corner of Balochistan to suppress the Baloch National struggle and maintain its colonial hegemony on Baloch land.

In this occasion Jabber Baloch, the general secretary of Baloch National Movement Germany, said our struggle is for a free Balochistan and today in this occasion I want to tell the world how Pakistan has been committing gross human rights violation in Balochistan. These cases of enforced disappearances in Balochistan are spiralling up.There goes not a single day when Pakistani forces abduct at least one Baloch.

Shar Hassan, the joint Secretary of Baloch National Movement Germany, said that the world must be aware of the ongoing genocide of Baloch nation. The silence of the world about Balochistan is questionable. In this occasion of the day of Human Right, we want to tell that every single individual should be protected. But unfortunately, Baloch nation may be does not fit in this category of the world. Where Baloch are even denied the right of demonstration and freedom of expression.
In this occasion Baloch National Movement Germany Badal Baloch and Amjid Murad also addressed to the audience.