Enquiry Commission’s visit to the VBMP’s Camp accelerates the debate on enforced disappearances of the Baloch youths. Written by Rahim Baloch Advocate. 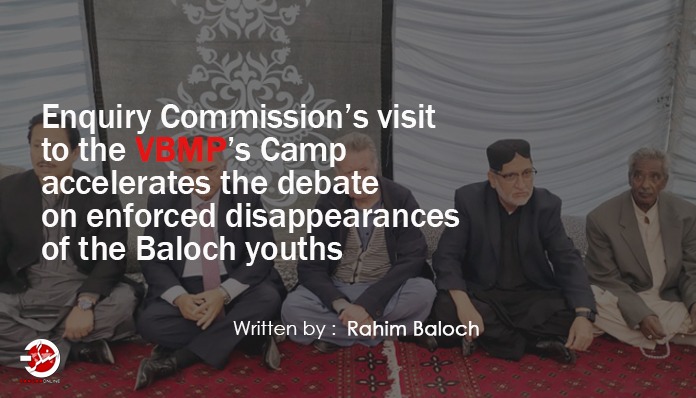 An enquiry commission visited the Camp of the Voice for Baloch Missing Persons (VBPM) at Quetta on November 15, 2022. VBMP is a human rights organization which is campaigning against the Pakistan army’s policy of enforced disappearances of the Baloch people. The delegation of the enquiry Commission met the family members of the victims of enforced disappearances who are continuously protesting for more than a decade against the enforced disappearances of their loved ones whom the Pakistan Army, intelligence services and other law enforcement agencies arrest or abduct, then detain them in the military dungeons for an undefined period without any trial. The commission is headed by the MNA Sardar Akhtar Jan Mengal, the President of Balchistan National Party. It’s noteworthy that the BNP is part of the PDM and coalition government of the premier Mian Shahbaz Sharif.

This enquiry Commission was formed on the directions of the Islamabad High Court in April 2022 while hearing the petition number 794/2022 filed before the court in February 2022 by the renown lawyer and human rights activist Ms Imaan Zainab Hazir Mazari. It has been alleged by the petitioner that the Baloch Students from Balochistan, who are studying in the various educational institutions of Islamabad and other cities of Punjab, are being subjected to harassment, enforced disappearance and racial profiling by the security agencies in the campuses as well as in their home towns when they go there to visit their families.
The Commission’s visiting delegation is comprised of the senator Kamram Murtaza advocate, the senior advocate Mir Ali Ahmed Kurd, former senator Afrasyab Khattak and others.

Though the Commission has been formed to enquire the complaints of Baloch students from occupied Balochistan who are seeking education in Islamabad and other cities of Punjab, but the issues complained in the petition are not confined only to the Baloch students seeking education in Punjab but the Baloch youths particularly students in the entire Balochistan. Even though the enforced disappearances, harassment and racial profiling of the only Baloch students have been complained in the petition but in reality the Baloch from all walks of life in the occupied Balochistan are facing the same crimes that have been enumerated in the petition.
The enforced disappearance, racial discrimination and extrajudicial killings of the Baloch youth, especially of the students have been adopted as policy tools by the Pakistan Army and intelligence agencies from the very inception of the current century to suppress the Balochistan’s independence struggle. The military and intelligence agencies, despite the court’s formation of the under discussion enquiry commission, still have kept continued the operations of enforced disappearances because they don’t deem themselves bound by law, courts, commissions or parliament. They firmly believe in the effectiveness of their savage policy and tactics of forced disappearance of the Baloch patriots.

Interestingly, the all members of the commission including Sardar Mengal, well known the limited scope and powerlessness of the commission and the court that’s why they offered no assurances about their ability of making the culprits accountable or stopping the army and intelligence from committing the crimes which have been complained in the petition. They only promised to prepare and submit a report that will truly reflect the reality of the situation and the pains and sufferings of the victim families. The delegation was scheduled to meet various authorities including the Corps Commander of the 12th corps in Quetta, occupied Balochistan.

It’s known to everyone that military is the most powerful institution in Pakistan. The parliament, the executive, the judiciary and media are functioning within the limits set by the army and intelligence. So called civilians well know their limits and redlines of army. It’s not the first commission to address the issues stated in the petition, particularly the enforced disappearances. Long before this enquiry commission, a Commission of Inquiry on the enforced disappearance was established in 2011 by the Pakistan People’s Party’s government to enquire into the complaints of enforced disappearances and hold the perpetrators accountable. A notorious Judge, justice retired Javaid Iqbal was appointed as president/chairman of that commission who still holds the position with zero relief to the victims. The UN Working Group on Enforced and Involuntary Disappearances, in its annual report of 2021, had termed the Justice Javaid Iqbal’s Commission of Inquiry on the Enforced Disappearance a failed body with zero credibility and had urged for its dissolution. However, equating the under discussion commission to that of Justice Javaid Iqbal will be wrong. Because the scope and the assignment of both the commissions are different. It’s also important that contrary to Justice Javaid Iqbal, Sardar Akhtar Jan and most of the members of his Commission, irrespective of their political views and party affiliation, have always been criticizing the use of enforced disappearances by the Pakistan’s military and intelligence agencies. So their position as enquiry commission affords them, along with victim families, a good opportunity and a suitable platform to highlight the crimes of Pakistan’s army and intelligence.

Factually the puppet civilian governments, before sworn in office, enter into agreement with the military and agree on renunciation of their powers and obligations in favor of the military and intelligence services regarding the affairs of the occupied Balochistan and foreign policy particularly in relation to India and Afghanistan. Such spineless committees and commissions are established by the governments just for deferring the issues and buying time. Such commissions are also meant to defraud the world community, international human rights institutions and the people at home by giving false impression of addressing the human rights issues through the legal process.

Same is the position of the apex courts. They deliberately avoid to summon the military and intelligence officers who are responsible for enforced disappearances, harassment, racial profiling and extrajudicial executions of the oppressed Baloch people. They do so to avoid the wrath of the military and intelligence. Because once the Supreme Court of Pakistan under the chiefship of the Justice Mr Iftekhar Muhammad Chaudhry attempted to assert its constitutional position by making army and intelligence officials accountable for their crimes against humanity in the occupied Balochistan and elsewhere in the Pakistan in 2007. That attempt of the Supreme Court badly annoyed the military. Consequently the military dictator General Pervez Musharraf abolished the constitution, arrested the judges and imposed emergency rule in 2007. That’s the reason the courts refrain from issuing orders against military personnel and prefer to issue directives to the powerless puppet executive. Such directives of the courts are aimed at shifting the burden on other state organs instead of screwing the culprits- the mighty army and intelligence agencies. Such practice of apex courts is nothing but a face saving.

In view of the above mentioned facts, a logical question arises whether the formation of the said commission and its proceedings are a futile exercise or are helpful in advancing the case of the victims of enforced disappearances? A brief analysis of the question shows that proceedings of the courts and such commissions are not a futile exercise. Though referring the issue to the enquiry commissions or committees is aimed at shifting the burden, deferring the matter for buying time or a face saving by the courts and executive. Furthermore it helps Pakistan to give a false impression of the rule of law in the occupied Balochistan. Besides that it may also promote a temporary belief in the legal system of occupier – Pakistan. Despite of the above mentioned all demerits, the proceedings before Kangaroo Courts and spineless enquiry Commissions and committees are helpful in keeping the agitation alive on enforced disappearances and other human rights violations, drawing the attention of the human rights groups, media and people. It’s also helpful in mobilizing the masses and exposing the human rights abuses and War Crimes of the Pakistan. Proceedings of such platforms are a good source of exposing the savagery of Pakistan’s army and intelligence services, their crimes against humanity, War Crimes and Pakistan’s colonial rule in Balochistan. Establishment of such committees and commissions amount to a confession of Pakistan’s use of enforced disappearances of Baloch youths, students and intellectuals as a weapon against the Baloch independence movement. Such platforms and their proceedings may serve as an effective means for the components of the Balochistan’s independence movement to highlight the gross human rights violations such as enforced disappearances and extrajudicial killings of the Baloch patriots.
The concluding point of this article is that the formation of such commissions on the issues of enforced disappearances, harassment, racial profiling and extrajudicial executions of the Baloch people, particularly the youth and students is an acknowledgment of the fact that the Pakistan has lost its status as a legal entity in countering the Balochistan’s freedom struggle. The Liberation Movement of the occupied Balochistan has paralyzed the Pakistan’s colonial establishment in the region. Pakistan’s military has lost its capacity to combat Balochistan’s freedom forces and people’s long cherished aspirations for independence through international legal standards.
Though sometimes foreign analysts describe the Baloch freedom movement a low-level insurgency but were it true then Pakistan must have dealt with it within its constitutional and legal framework. Pakistan’s use of enforced disappearances, fake encounters, kill and dump etc and its war crimes in occupied Balochistan indicate a different reality.