Germany: BNM protest in Chemnitz against enforced disappearances in Balochistan 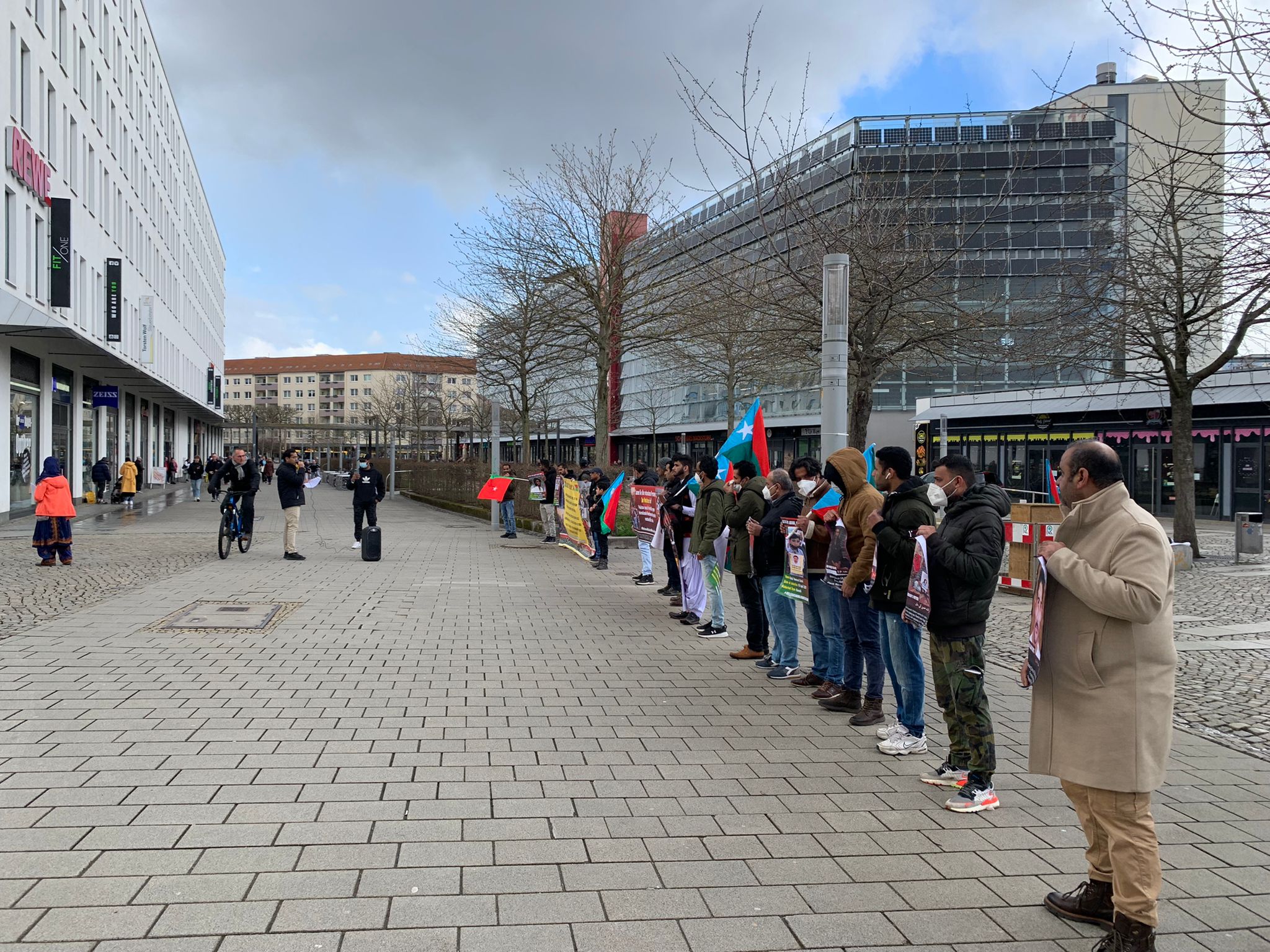 BNM Germany Zone organized a demonstration on 9th April at Chemnitz against enforced disappearances in Balochistan.

Activists holding pictures and placards of missing persons in their hands chanted slogans against enforced disappearances and military operations in Balochistan.

On this occasion, the President of BNM Germany Zone Hammal Baloch while paying homage to the martyrs of Murgaap said that today is a dark day for the Baloch nation.

He said that on this very day in 2009, the great leader of the Baloch nation, Ghulam Muhammad, along with his comrades Lala Munir and Sher Muhammad were martyred after being forcibly disappeared due to their role in Baloch national struggle.

Hammal Baloch said that Martyrs of Murgaap irrigated the land with their blood and today, 13 years later, they are still alive in our hearts.

He said that Pakistan had physically separated Ghulam Muhammad from us but his teachings and philosophy of politics are guiding the Baloch nation.  It is thanks to the teachings and sacrifices of these martyrs that today, not only in Balochistan but all over the world, wherever Balochs live, they follow this ideology and philosophy.

He said that it is our belief that the sacrifice of Shaheed Ghulam Muhammad and his associates will be a blessing for the Baloch nation.

Addressing the demonstration, General Secretary of BNM Germany Zone Asghar Ali said that Ghulam Muhammad and his associates had raised awareness in the Baloch nation for restoration of national independence and in return for this Pakistan had made Ghulam Muhammad, Lala Munir and Sher Mohammad disappeared and later on, threw their mutilated their bodies at Murgaap.

He said that the Pakistan Army and its intelligence agencies forcibly disappeared Baloch leaders in broad daylight from the law chamber of the well-known lawyer Kachkol Ali Advocate. This attitude of Pakistan makes it clear that Pakistan wants to make Balochistan its colony by force.

He said that every voice raised for the rights of the Baloch nation has been suppressed by force.  But Pakistan has failed to suppress the democratic and political struggle for the independence of Balochistan.

Asghar Ali added that in 2021, Pakistan has forcibly disappeared more than 450 people.  More than 50 people have been forcibly disappeared in a single day in February this year. This process has been going on for years. Hundreds of political activists including Dr. Din Muhammad Baloch, Ramzan Baloch, Chairman Zahid Baloch, Shabir Baloch have been kept in torture cells for years.

He said that Pakistan was making Balochs victims of enforced disappearance not only in Balochistan but also abroad.  A clear example of this is Rashid Hussain and Hafeez Baloch who were extradited to Pakistan after being forcibly disappeared from the United Arab Emirates.

On the occasion, Baloch Republican Party leader Abdul Majeed Baloch said that civilized nations should play their role for the safe recovery of thousands of missing political activists while exposing Pakistani atrocities in Balochistan.

Saeed Baloch, Banuk Fatima and Banuk Bakhtawar Baloch addressed the protesters in German language and informed the people about Pakistani oppression and disappearances in Balochistan.

A pamphlet in German and English was distributed on the occasion which included details against enforced disappearances and other state repression in Balochistan.

During the protest, a Pakistani man intervened and tried to harass Saeed Baloch, a BNM activist, who was apprehended by German police and taken into custody.