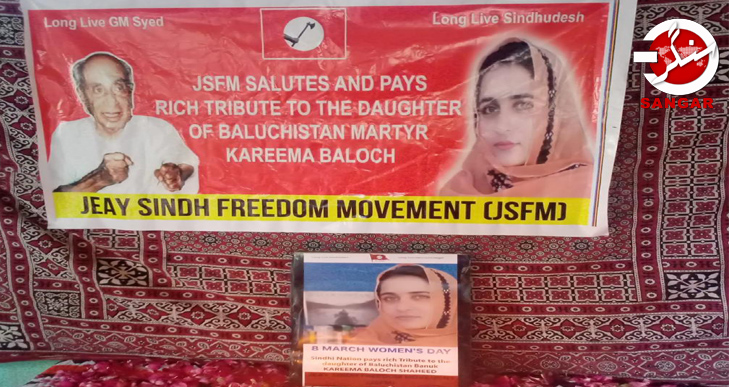 On the occasion of International women’s Day , Jeay Sindh Freedom Movement (JSFM) has
organized candlelight vigil gathering across Sindh to tribute Banuk Kareema Baloch – A human
and political activist from Baluchistan – who was disappeared on 20 December 2020 and later
her dead body was found on 22 December 2020 in Toronto Canada . She was well known
woman activist and was also named by BBC in the list of 100 inspirational and influential
women’s of the world in 2016.
Candlight vigil programs were held in Karachi, Hyderabad , Nasirabad, Dahirki , Nawabshah,
Nusheroferoz . Moro and other cities of Sindh . In the organized programs of JSFM many
women activists took active part , showered flowers and lighted candles in front of photos
and banners of Kareema Baluch .
Banuk kareema was Student leader of BSO( Bloch Students organization). Due to her active
role in social , political and human rights activities , She was threatened by security forces of
Pakistan and later she was charged in anti state cases by government of Pakistan , hence she
left to Canada to take asylum .
Kareema Baloch was most active , brave and talented leader, She broke all the patriarchal
and feudal barriers of the society and took active part in social, political and human rights
activities in Baluchistan. After her assassination , she has become a symbol of struggle and
bravery not only in Baluchistan but across the south Asian region.Her struggle and sacrifice for
freedom is a light for other political and human rights women of the region particularly for
women of Sindh and Baluchistan .
Jeay Sindh Freedom movement decided to tribute bank Kareema Baluch and the revolutionary
women’s of Sindh, Baluchistan and rest of the world. In a joint party Statement, JSFM Chief
Organizer Zafar sahito , Deputy organizer Sohail Sindhi and central organizers Muhammad Ali
Noonari , Hussain Sindhi and others said that Kareema Baloch’s murder is an open state
terrorism and brutality of state of Pakistan. No one is safe in this theocratic state of Pakistan
neither Political and human rights nor women and non muslims ,like Hindu, Christinas and
others.
JSFM leaders jointly said that Sindhi nation pays rich tribute to the daughter of mountains of
Baluchistan martyr Banuk Kareema Baloch and the brave Sindhi women like JIJI Dur-eshahsawar , Mother Elsa Qazi , MAi Jindu, Mai Bakhtawar and the brave women of hur guerrilla
movement. Leaders further said that JSFM believes in equality for women in every sector of
the life. Our organizational structure is also based on equality any of women can be our chief
and supreme leader . Role of women in politics specially in freedom struggle is inescapable.
Women have the same but more capabilities then men , she can perform any difficult tasks
and targets assigned to her in every field of life. JSFM will work more actively to mobilize
women’s of Sindh to bring them in national and pro freedom political struggle to modernize the
way of struggle in 21st century .
After party Activities Leaders of JSFM , Party Chief Organizer Zafar Sahito, Deputy Chief
Organizer Sohail Sindhi, Central Organizers Muhammad Ali Noonari, Bakhtawer Sindhu and
Baloch political and human rights activist Hanni Gul Baloch were also gathered on live
discussion and paid tribute to martyr Kareema Baloch and other women of Sindh, Baluchistan,
Kurdistan and rest of the World. Live discussion was broadcasted and published live on social
media platforms Facebook, Twitter and on Youtube channels .