Hidden and unheard story of Balochistan – By. Riaz Baloch 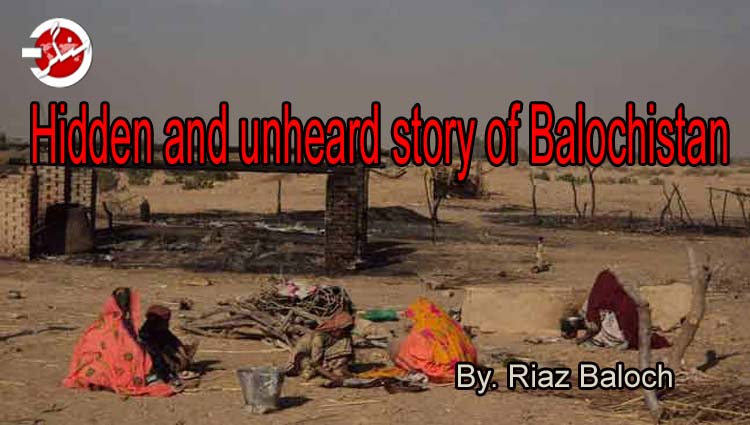 Balochistan is unknown to the world not because Baloch people are not subjected to atrocities since 27th March1948, when Pakistan forcibly annexed them or that they are not resisting the perpetrated injustices with all the meager resources available to them. it is unknown because the exigencies of the world and that of the comity of the nations the United Nations Organization do not correspond to the needs of the people being oppressed there. The Baloch and their struggle has been relegated to obscurity by the world more interested in appeasing dictators and state armies which are ready to serve the world powers with loyalty and dedication.

The world is in the habit of being immune to the pain of people being oppressed by states that pay no heed to conventions on human rights. The UNO which represents the world also reflects their attitude and hasn’t in all these years even tried to make Pakistan comply with conventions on enforced disappearance and torture it brazenly refuses to sign. This attitude has encouraged Pakistan to flout all laws and norms regarding human rights and civil liberties in Balochistan.

The situation in Balochistan is no secret because even the Chief Justice of Pakistan’s Supreme Court laments the human right abuses and extra-judicial killings by the premier intelligence agencies, the Army and the Frontier Corps. He on record has blamed them and summoned them to court but the abductions, killing and subsequent dumping has not only continued but increased substantially. As if to prove their point these institutions with the start of the UN Working Group on Enforced or Involuntary Disappearances (WGEID) mission’s visit on September 10th 2012, have started dumping the brutally tortured bodies of hitherto missing persons. The Pakistani state wants to ensure that next time around there would be no fact-finding missions here to uncover their atrocities and excesses against the Baloch people.

I’m here to highlight the atrocities and excesses that have been committed against Baloch people since the last 72 years. If the world and the UNO continue to ignore the sufferings of the Baloch people it would tantamount to being complicit in the slow-track genocide being committed in Balochistan by the Pakistani state. The world should awaken to the plight of all the oppressed nationalities being subjected to atrocities and excesses by the majorities or the minorities wielding state power.

The Baloch people have persisted with their struggle for self determination without external support or for that matter even moral support of the world which should have by now learnt to support the oppressed wherever they may be. We appeal to the conscience of the world to help Baloch get their inalienable right to freedom from Pakistan for before Balochistan’s forcible annexation on 27th March 1948 the Baloch were independent for 227 days.

Balochistan which is hidden from the eyes of the world is currently suffering from a serious humanitarian crisis.In Occupied Balochistan pakistani army had embarrassed the humanity. Pakistan’s inhuman atrocities in Balochistan are suppressed, because there is total media black out.

The world’s longest and most peaceful protest has been going on for more than ten years in Quetta Balochistan. It’s for whom they have been forcibly disappeared by Pakistani state agencies and forces for demanding their national liberation.

More than 40,000 Baloch Political and social activists are currently abducted from Balochistan and thousands have been extra-judicially killed in the last 18 years. International human rights organisations are not being given access to Pakistani occupied Balochistan and they seem helpless.

Our appeal is to human lovers world, and the civilized democratic countries to speak against the atrocities and oppression in Balochistan for the sake of Humanity.