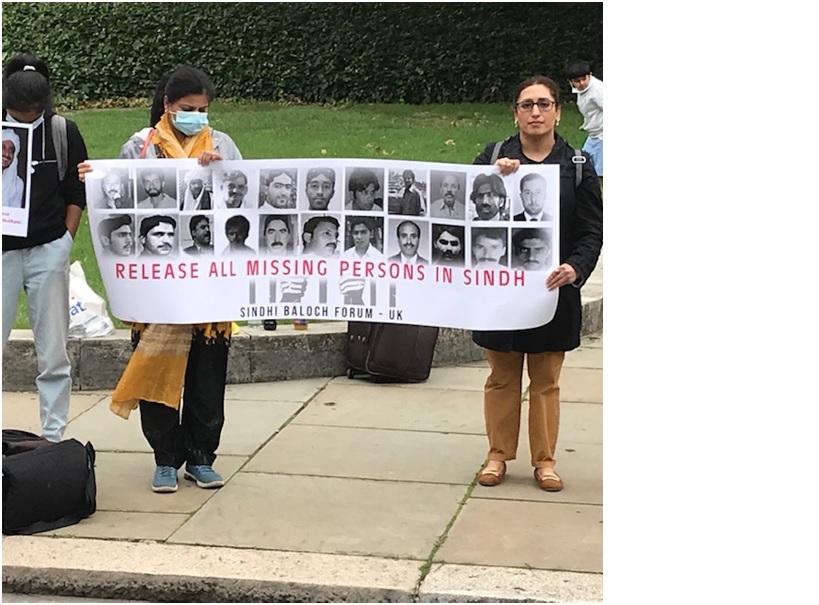 The representatives and supporters of Sindhi Baloch Forum on Monday held a protest demonstration outside the houses of parliament in London to highlight the unresolved issues of enforced disappearances in Pakistan.

The protesters who had gathered to voice their concerns on the occasion of the International Day of the Victims of Enforced Disappearances provided disturbing accounts of victims of enforced disappearances in Sindh and Balochistan and of the various challenges facing their families whom the judiciary has failed to offer any remedy.

According to Dr Hidayat Bhutto, a representative of the Sindhi Baloch Forum, the criminal practice of enforced disappearances by the military establishment of Pakistan has been employed against the Sindhi and Baloch political activists to contain their legal right to exercise their right to self-determination.

“The enforced disappearances of Sindhi and Baloch nationalists is a routine practice in Pakistan. The security forces of Pakistan forcibly disappear the victims, often in the presence of eyewitnesses, and detain them incommunicado. They are not charged or tried in the court, instead, the military acting outside its constitutional ambits keeps them in detention for an indefinite period of time, and in most cases, torture the victims and dump their mutilated dead bodies in desolated areas to terrorize the entire population with impunity”, said Dr Bhutto.

A petition signed by Samad Baloch, Hakeem Wadhela and Dr Hidayat Bhutto of SBF was submitted at the UK Foreign and Commonwealth Office.

“In Pakistan, Baloch and Sindhis are facing the most ruthless state oppression in contemporary history. The cultural, social, historical, economic, and political marginalization is the hallmark of their subjugation. The people in Balochistan and Sindh have been struggling against these subjugating measures by peaceful political mobilisation. The religious fundamentalist state of Pakistan has been reacting to their genuine demands for cultural, economic, and political rights with the use of crude military prowess. Kidnappings, torture, solitary confinement, and extrajudicial killings by the state intelligence agencies are the usual ways adopted by the Pakistani state and have been graphically reported by various international human rights organisations including bodies of the United Nations”. read the petition.

According to the SBF petition, by all accounts, the acts of terror on the part of the Pakistani military establishment are tantamount to acts of genocide against the Baloch and Sindhi people and the tactics of keeping political and social activists incommunicado for years by state security agencies violate international conventions on human rights.

The petition further said, “In Sindh and Balochistan, enforced disappearances of students, doctors, teachers, journalists, human rights activists and political workers and leaders are happening on a daily basis. Whereabouts of thousands missing are still unknown. Systematically, the Pakistani army and its notorious Inter-Services Intelligence (ISI) and Military Intelligence (MI) are physically wiping out the cream of Sindhi and Baloch societies. Besides this, the Pakistani military establishment has created numerous religious terrorist organizations as proxy “Death Squads”. Many prominent Baloch and Sindhi social, intellectual, and political figures have been targeted and eliminated by these squads”.

Consequently, the SBF requested the UK government for an immediate intervention in Sindh and Balochistan.

“We believe the international community should not watch silently the gross violations of human rights and genocide acts of the Pakistani state in the name of the principle of state sovereignty. The Baloch and Sindhi communities in the UK, therefore, request your immediate intervention. We request that this petition be taken as an urgent humanitarian appeal. Your immediate intervention could save not only countless innocent lives but could also bring good news for the families and relatives of thousands of forcefully disappeared people lingering in the dungeons of Pakistani security forces. We will be grateful if the government of the United Kingdom could press for the establishment of an International Commission to investigate the heinous crimes against humanity committed by Pakistani state establishments in Balochistan and Sindh”, said the SBF.