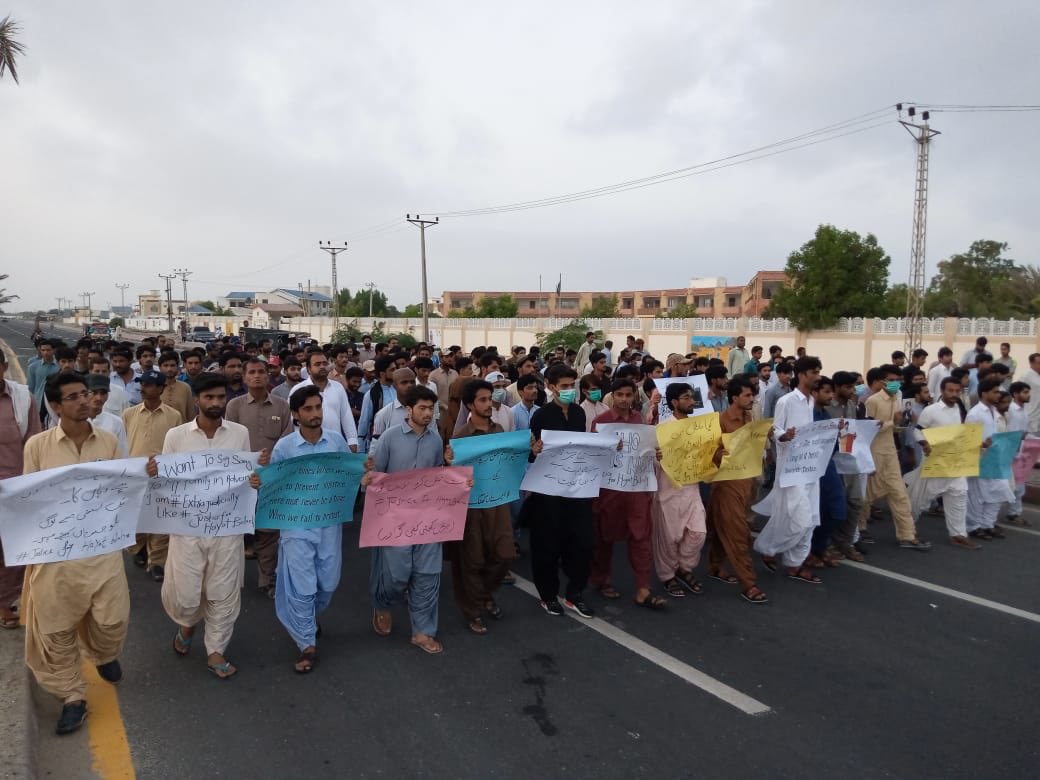 Demonstrations held in Quetta, Khuzdar, Pasni, Gwadar and Turbat cities of Balochistan against extrajudicial killing of the Baloch student.

Protests have entered the 4th day in Balochistan as hundreds carried out rallies and protests in several big cities of Balochistan to demand justice for Baloch student Hayat Baloch, who was killed by Pakistani security forces in Turbat.

A candlelight walk was organized in Khuzdar city by the Bramsh Solidarity Committee Khuzdar against the killing of Hayat Baloch in Turbat Absar by forces, on 13 August.

A big number of people including children took part in the candle walk, participants were holding placards with slogans against the assassination of the Baloch youth.

Meanwhile, according to reports from Pasni, Civil Society Pasni protested against the killing of Hayat by Pakistani security forces.

A silent rally was carried out from Pasni Press Club to Mashaallah Junction by numerous people, while a large number of women also took part in the rally.

Addressing a protest rally in Pasni, the speakers termed the assassination of Hayat Baloch as Baloch genocide.

Speaking on the occasion, the speakers said that a judicial inquiry should be held into the murder of Hayat Mirza and those involved in the crime should be brought to justice.

Meanwhile, a large number of students gathered in front of the Press Club in capital city, Quetta and lit candles in the memory of Hayat Baloch.

On the occasion, the student leaders condemned the killing of Hayat Baloch and said that the FC official involved in the murder should be punished immediately and the demands of justice should be met.

It is to mention that a day earlier, hundreds of people took to the roads in Quetta and staged sit-ins in front of Quetta and Karachi press clubs.

Similarly, hundreds rallied in Gwadar city of Balochistan, today to demand justice for the Baloch student.

Meanwhile, the ‘Baloch Students Educational Organization’ has announced a nationwide protest on August 22.

Whereas, a day earlier a demonstration was held by the Baloch Solidarity Committee in Turbat, a large number of people including women and children participated in the protest, and demanded for Justice.

Speaking on the occasion, a female addressed, that the state has forced us to ask for justice on the streets with our infants in this scorching heat. “If we remain silent, these bloodthirsty beasts will eat our descendants,” she added.

Rashida Saleh, a female participant in the protest, said, that the FC official involved in Hayat Baloch’s murder has been taken into temporary custody to avoid public backlash. If we remain silent, our generations will have to pay the price, which will be terrible.

It should be noted that extrajudicial killings and disappearances of Baloch youth by the “security forces” in Balochistan is a serious issue, which has been the subject of protests for a long time. The protests have intensified since the assassination of Hayat Baloch last week.