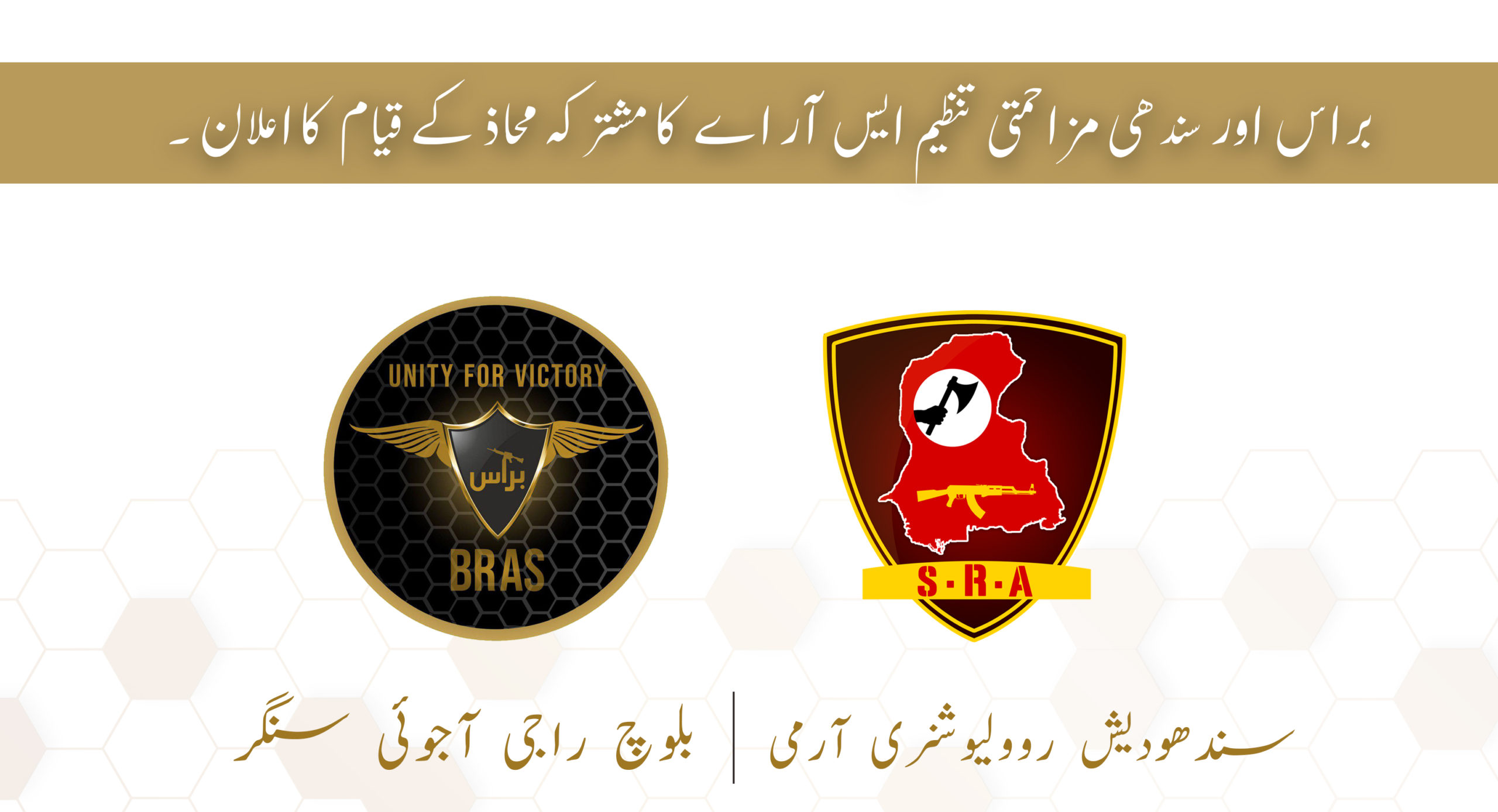 The spokesperson for the umbrella organization of the Baloch pro-independence organizations “Baloch Raj Aajoi Sangar” Baloch Khan said in a media statement that representatives of the BRAS, umbrella org comprising of Baloch Liberation Army (BLA), Balochistan Liberation Front (BLF), Baloch Republican Army (BRA), Baloch Republican Guards (BRG), and the commanders of Sindh pro-independence organization Sindh Revolutionary Army (SRA) held a session at an unknown location where the participants assessed the latest geopolitical situation and announced the formation of a united front and joint strategy to liberate the oppressed Balochistan and Sindh from Pakistan.

The participants in the session unanimously agreed that the Sindhi and Baloch nation have had political, historical and cultural ties that have persisted for thousands of years. Currently, both nations aim for independence and both consider Pakistan state (Punjab) an archenemy. Therefore, it is the need of the time for both historically neighbouring nations to form a united resistance front.

The participants further said that the Sindh and Balochistan are equally affected by the expansionist and oppressive resolves of China. Through the China Pakistan Economic Corridor (CPEC), Pakistan and China aim to subjugate Sindh and Balochistan to acquire their illegitimate political, economic and militaristic interests and want to occupy the coasts and resources from Badin to Gwadar.

The coast of Sindh and Balochistan is not only connected to the Indian Ocean but is paramountly important for the global trade, the transit route of the Strait of Hormuz, is also located in its vicinity. To militarily entrench themselves in the Indian Ocean and the Persian (Baloch) Gulf, both China and Pakistan aim to occupy the coasts of Sindh and Balochistan by subjecting them to their expansionist resolves. To thwart the political, economic and militaristic expansion of China and Pakistan, India and other regional powers have to stand with oppressed Sindhi and Baloch nations. Only this strategic deployment and cooperation will promote regional peace and save the global stability, the participants said.

The session further said that Sindhi, the heir of the 8000-year-old Indus civilization, and Baloch, the heir of the 11,000-year-old Mehrgarh civilization, have ruled this land for thousands of years. These nations have successfully saved their land, civilization and independence from countless plunderers, invaders and oppressors throughout their history. Today, they are being tested before the illegitimate, oppressive and plundering Pakistani state. Therefore, it is the time for the Sindhi and Baloch to form a united front to vanquish repel the oppressive Pakistani state from their homeland.

Owing to the historical ties between Sindhi and Baloch nations and their collective interests, the alliance of the Baloch pro-independence organizations, BRAS, and the Sindh Revolutionary Army (SRA) announce the formation of a united front against the common enemy – Pakistan, the session announced.

This alliance will establish contacts and ties with other oppressed nations and resistance organizations through the stipulated points, conditions and the code of conduct to form a vast and resilient entity and liberate the oppressed nations from Pakistan’s grip, the session concluded.