Hyrbyair Marri who is making bogus claims about BLA. 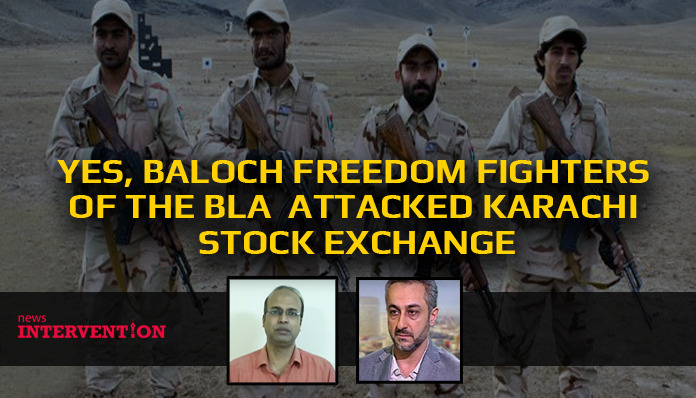 Several impostors have begun to lay claim over the Baloch Liberation Army (BLA) in their desperate effort to derail the Balochistan’s freedom movement. One of them is Hyrbyair Marri who is making bogus claims about BLA.

It was Monday, June 29, when news first poured in about the attack at Pakistan Stock Exchange in Karachi. This was ‘Breaking News’ and was promptly flashed across all television news channels, portals and news agencies. But in a zest to race ahead of their competitors, journalists across the world, especially those in India made a blunder. Even before there could be any confirmation about the perpetrators of Karachi attacks the headlines started screaming: “Terrorists attack the Karachi Stock Exchange,” followed by similar tweets, memes and Facebook posts, all of which said that terrorists have turned against their masters in Pakistan.

A few hours later it emerged that the Baloch Liberation Army (BLA) had attacked the Karachi Stock Exchange to protest against the daily killings, enforced disappearances across occupied Balochistan. With this attack the BLA wanted deaf Pakistan Army Generals sitting at Rawalpindi to hear Balochistan’s plight and to tell the world about ongoing Pakistani atrocities and human rights violations across occupied Balochistan. However, even after BLA took responsibility of attacks the headlines about “terrorists” striking the Karachi Stock Exchange stayed on and tweets continued to be floated all around. In fact, ‘terrorists attacking Karachi’ was Pakistan’s narrative that the gullible media had quickly bought in. This narrative could have sailed through if not for timely intervention on social media and new media platforms that wrote detailed analysis about the basic purport of BLA’s attacks and the freedom struggle for Balochistan from Pakistan’s illegal occupation.

A large number of Baloch people, the Baloch diaspora and revolutionaries intervened with their side of the story that the Karachi attack was on Pakistani and Chinese establishments and that the attackers were revolutionary freedom fighters who had taken the extreme step to sacrifice their lives for Balochistan’s freedom movement.

But then Pakistan’s propaganda machinery remains quite strong. It pulled its strings and a group of people sitting pretty at London came out openly against the Karachi Stock Exchange attack. They made bogus claims that they “own” the Baloch Liberation Army (BLA) and that the BLA was not involved in this attack. One of them is Hyrbyair Marri.

Unfortunately, rather than question the likes of Hyrbyair Marri about the basis of his statements, a large section of media remained blindfolded, bought his story and walked straight into the propaganda trap laid by ISI.

The world must know. The struggle for Balochistan’s independence is going on since March 27, 1948 when Pakistan illegally occupied and annexed an independent nation– Balochistan. The current phase of Baloch freedom struggle gained momentum since 2002. And now after the BLA’s June 29 attack on Karachi Stock Exchange, Balochistan is at least being talked about across the world.

Apart from BLA, the other frontline revolutionary organisations in Balochistan include the Balochistan Liberation Front (BLF), Baloch Republican Army (BRA) and the Baloch Liberation Army (BLA). These different armed revolutionary groups have created a joint platform Baloch Raaji Aajoi-e-Sangar (BRAS) to synergise their efforts. BRAS has carried several attacks on Pakistan Army in the recent past. This is testimony to the unity of different Baloch revolutionary groups.

The Majeed Brigade (self-sacrificing/fidayeen) squad like the four Baloch revolutionary freedom fighters who attacked Karachi Stock Exchange were from the BLA.

When BLA was formed its operational activities were being handled by Khair Baksh Marri’s son Balach Marri, while BLA’s public relations activities abroad were handled by Khair Baksh Marri’s elder son Hyrbyair Marri. This arrangement worked quite smoothly for some time. Later on when Balach Marri was martyred during his operations against the Pakistan Army, then BLA’s operational activities on ground were taken over by other Baloch leaders that included Aslam Baloch, Hamid Shahin, Amir Baksh Lango, Ali Sher Khurd and others.

Aslam Baloch and other revolutionaries along with Nawab Khair Baksh Marri put BLA’s activities on a fast track but then suddenly several functionaries of the BLA such as Amir Baksh Lango, Ali Sher Khurd, Ghaffar Lango, Hamid Shahin were killed by the Pakistan Army. Several Baloch sources explain that this happened probably due to the involvement of Hyrbyair Marri, who has now started speaking against the BLA’s involvement in Karachi Stock Exchange attack.

And then the events took an unexpected turn. Pakistan suddenly announced that Rashid Rauf had escaped from their custody and the prisoner swap between UK and Pakistan was held back. A few months later Pakistan announced that Rashid Rauf was killed in a drone attack. Hyrbyair Marri soon became a free man in London. Interestingly, Hyrbyair Marri stayed back in London after this saga as a “Pakistani citizen” and thus began his second innings as “Baloch activist”. Surprisingly, Pakistan stopped pressing UK government for Hyrbyair Marri’s extradition and he soon formed a company Bolan Limited that was registered in England & Wales. The two Directors of Bolan Limited are Hyrbyair Marri and Ali Syed Gallani both of whom are Pakistani citizens as per the registration documents of the company.

Hyrbyair Marri still holds a Pakistani passport that is promptly renewed by Pakistan and now has three different houses at different locations in London. It’s ironic that the same Hyrbyair Marri who was wanted by Pakistan for terrorism charges and inciting Balochistan’s freedom struggle can now promptly get his Pakistani passport renewed. And then he continues to call himself a Baloch revolutionary!

This was a shrewd move by the ISI. As per the deal Hyrbyair Marri was to anyhow usurp the ownership of Baloch Liberation Army (BLA) and in return he could stay back in UK on a Pakistani passport, which would continue to be renewed at periodic intervals.

Very soon the ISI’s underhand dealings with Hyrbyair Marri were exposed and Late Nawab Khair Baksh Marri broke all ties with his elder son Hyrbyair Marri and said that he is no more a revolutionary.

Truth prevailed and Aslam Baloch along with other Baloch revolutionaries further exposed the dubious propaganda being run by Hyrbyair Marri. Aslam Baloch took the command of BLA. This was in the year 2017. It was at this time that Aslam Balcoh along with Dr Allah Nazar Baloch and several other comrades forged tie-ups with other Baloch revolutionary groups and formed the joint revolutionary front BRAS (Baloch Raaji Aajoi-e-Sangar) by stitching together an alliance of the Baloch Liberation Army, Balochistan Liberation Front, Baloch Republican Army and the Baloch Republican Guard in order to jointly fight for Balochistan’s independence.

A year later in 2018, Aslam Baloch was martyred in a suicide attack by Pakistan-backed Taliban faction that was carried out soon after the BLA’s attack on Chinese consulate in Karachi. After this BLA’s command was passed on to a young leader Basheer Zeb who at one point of time was trained by Dr Allah Nazar Baloch during his time as a student activist at the BSO (Balochistan Student’s Organisation). Basheer Zeb is very well read and youth leader of the BLA. As the leader of BLA, Basheer Zeb has put Pakistani Army in a tight spot with back-to-back attacks on their facilities.

It’s under Basheer Zeb’s able leadership that the BLA freedom fighters have successfully carried out the attack on Karachi Stock Exchange on June 29. But the impostors who had earlier tried to sabotage BLA and the Baloch revolution for their own personal gains have become active once again. It’s sad that media has begun to quote such people as the leaders of BLA.

After the success of June 29 attack, Dr Allah Nazar Baloch categorically said that the Baloch youth are sacrificing themselves to crush the colonial arrogance of the occupying enemy and not for fame and glory. “The attack on Karachi Stock Exchange was a warning to Pakistan and China to quit Balochistan. Pakistan has cheaply mortgaged Baloch lands to China. China’s presence in Balochistan has become a threat not only to the Baloch national survival but it poses a danger to the entire world. We believe that the world is still unaware of China’s intentions and that the Baloch people are the only ones fighting this modern imperialist monster. The attack on the base of Chinese moneylenders in Karachi after the attack on the Chinese base in Gwadar is a continuation of the attacks on its strategic assets. The Baloch will continue it, no matter what the cost,” Dr Allah Nazar explained with a firm determination.

BLA’s attack on Karachi Stock Exchange struck at the Pakistan’s economy and has also taken Balochistan’s freedom struggle to every corner of the world. People around the globe are now discussing how Pakistan Army is running a massive military campaign replete with heavy artillery, sophisticated machine guns and helicopter gunships across occupied Balochistan against the common Baloch people.

“If the deaf are to hear, the sound has to be very loud,” said Shaheed Bhagat Singh at the trial for bombing the Central Legislative Assembly on April 8, 1931 during India’s struggle for independence.

BLA freedom fighters Salman Hamal, Taslim Baloch, Shehzad Baloch and Siraj Kongar who were martyred after the Karachi attack said similar words. “We want to make it clear to the upholders and champions of human rights like UN, EU or US State Department that you have failed to take notice of the Baloch genocide and exert pressure on Pakistan to stop this genocide. You have failed to hear the voice of Baloch nation therefore we have been left with no option but to go to this extreme,” said the BLA freedom fighters in their recorded video message.

The world must appreciate that BLA freedom fighters who attacked Karachi Stock Exchange did not target the innocent common people of Karachi rather they chose to kill the immoral money lending syndicate of Pakistani and Chinese nationals who have turned the Pakistan Stock Exchange into their den. Just as Bhagat Singh and Batukeshwar Dutt hurled bombs to draw world’s attention to British colonialism in India, the BLA freedom fighters have attacked the Karachi Stock Exchange to make the world take note of Pakistan’s  atrocities in occupied Balochistan

We are publishing this article with thanks of newsintervention

Founder & Editor-in-Chief, News Intervention.
He has been in various editorial roles at The Times of India, Deccan Chronicle, The Asian Age and Hindustan Times.
Vivek is also a Filmmaker and has made several short films and documentaries. His documentary “Muzaffarnagar–aakhir kyon?” that has a detailed account of 2013 communal riots at Muzaffarnagar has been highly appreciated and is extremely popular. Vivek is also the Author of novel “Chip in the Madrasa” which is an insightful tale that unravels the vicious game of Wahhabis and their vice-like grip on Muslim minds across the globe.
His Twitter handle is @viveksinha28