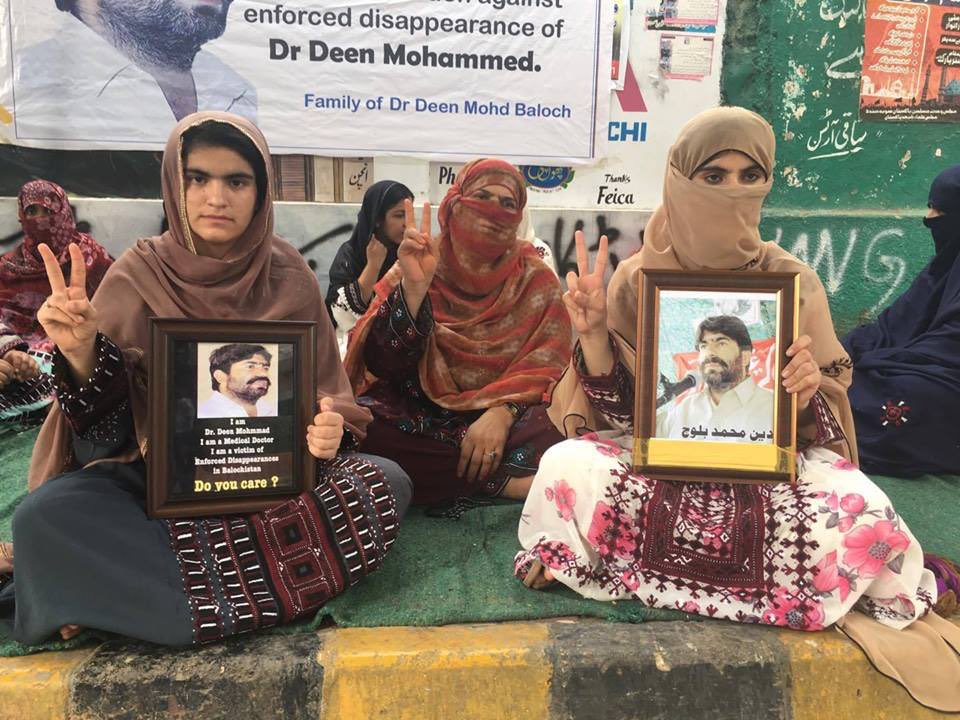 We have grown up in this (VBMP) hunger strike camp, but justice couldn’t be obtained, Said Sammi Baloch, Daughter of missing Dr Deen mohammad.

Sammi Baloch expressed her views in protest camp of the Voice for Baloch Missing Persons (VBMP), saying “I made every possible effort for the safe recovery of my father but couldn’t attain justice, as he is still missing.

On this occasion, Sammi’s sister, Mehlab Deen Mohammad was also present at the camp.

Sammi Baloch said; “after the enforced disappearance of my father the pain that we have been going through, only my family can understand. We have knocked all the doors for justice, but I have to say with regret, that 11 years has passed but we couldn’t get justice.”

“Once again I am sitting in this (VBMP) camp. I appeal to Human Rights Organizations to play their role for providing me justice,” She added.

Sammi Baloch has said, I too should be treated as a citizen of this country and provided justice.

It is to mention that Doctor Deen Mohammad was taken into custody on 28th June, 2009 from Khuzdar district of Balochistan and transferred to an unknown location, after which he is still missing.

Daughters of Dr Deen Mohammad Baloch, Sammi Baloch and Mehlab Baloch protested in front of Quetta and Karachi press club for years, they raised their voice on different forums for his recovery. They also took part in the long March of Voice for Missing Persons from Quetta to Karachi and to Islamabad.

Dr Deen Mohammad was affiliated with a political party known as, BNM (Baloch National Movement). He was a Central Committee member of the party when he went missing. According to his family and party BNM, that Pakistani forces and intelligence agencies abducted him while he was on duty.

On the 11th anniversary of Dr Deen’s disappearance, BNM announced that a global protest program would be organized for him and to acquaint the issue to the world, and an online campaign on social media will be launched on 27th of June with hashtag #SaveDrDeenMohdBaloch.

It is pertinent to mention that such abductions have been carried out innumerable times in Balochistan. Leaders, activists and vocal members of various student organizations have been allegedly detained by the security forces and kept incommunicado.

VBMP has been protesting non-stop for almost 4000 days. As per VBMP, as many as 45,000 Baloch men, women and children have been disappeared, who are languishing in torture cells.

VBMP also alleges that at least 5,000 missing persons have been killed and dumped over last one decade.